Something for Everyone... Music Humor and Family Fun!

Mary Wiles has been rated as one of the top women performers in Northwest country music, and has been compared to the legendary Barbara Mandrell because she plays so many instruments!  Fiddle, banjo, blues harmonica, mandolin, keyboards and guitar are all highlighted in one of Mary’s shows with songs people will remember and love. 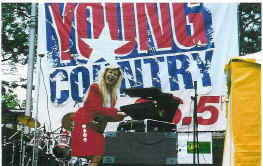 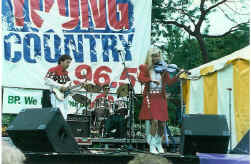 Comedy filled, family oriented country variety show!
From Dueling Banjos, Orange Blossom Special and The Devil Went Down to Georgia, to Hot Rod Lincoln, Elvis and the Monster Mash, audiences will get what they want and more!  All the band members join this non-stop ride that will have crowds glued to their seats, waiting for the next entertaining surprise!  From the costumes to the production, from one song to the next, it’s easy to see why the Mary Wiles Show has become such a popular show!

"Wiles is riding a wave of critical acclaim with songwriting and live performance awards.  She has been hailed as one of the Northwest’s hottest attractions on the country music scene."  Journal of the San Juans

In Grandstand Shows, For Featured Concert Appearances, Opening for the likes of Tracy Byrd or Loretta Lynn and more Mary puts on one fantastic show! Mary has performed at everything from local venues like the Puyallup Fair to the famous Bluebird cafe in Nashville and the Goodwill Games The full show is available for almost any kind of event from a picnic to a stage show, a party to a grand opening or promotional event.

"Your performance without a doubt was one of the best!"   Terri Hickel, Goodwill Games


The Mary Wiles Show has established itself as the region’s premier country rockin’ blues band through vocal dexterity and supreme musicianship."  The News Tribune, Tacoma

"Wiles is a legend in her own city"  Carole Beers, Seattle Times

Mary is a joy to have a s a performer.  The audience loved her again!
Scott and Jan Robinson, Greater Bothell Arts Fair